The continuing recovery from the Little Ice Age

by Syun-Ichi Akasofu of the International Arctic Research Center, University of Alaska Fairbanks

[Dr. Syun-Ichi Akasofu, IARC Founding Director and Professor of Physics, Emeritus, was the the director of the International Arctic Research Center of the University of Alaska Fairbanks from its establishment in 1998 until January of 2007. He originally came to the University of Alaska Fairbanks in 1958 as a graduate student to study the aurora under Sydney Chapman, receiving his PhD in 1961. He has been professor of geophysics since 1964. Dr. Akasofu has published more than 550 professional journal articles, authored and co-authored 10 books and has been the invited author of many encyclopedia articles. He has collaborated with numerous colleagues nationally and internationally, and has guided nine students to their Ph.D. degrees.]

It is extremely difficult, if not impossible, to determine observationally the contribution of the natural component and the CO2 component in climate temperature changes during the last century. However, it may be possible to determine the contribution of those components by tracing back the past climate changes from 1000 to 2000. There is  abundant evidence to indicate that the Earth experienced a relatively cool period, of about -1°C, from ~1200 to ~1800, compared with the present.  This period is called the Little Ice Age (LIA).

The recovery from the LIA was not step function-like. A large number of data sets show that the recovery, namely the temperature rise, was approximately linear from 1800~1850 to 2000.

Thus the rate of temperature rise during the last 200 years is about +1°C/200 years,  + 0.5°C/100 years, which is about 5/6 of the rate of increase (+0.6°C/100 years) during the last century. Therefore, it may be inferred that the CO2 contribution was about +0.1°C during the last century. There was no obvious break in the rate of temperature rise during the last 150~200 years, so it is likely that the recovery from the LIA is continuing to the present. Sea level rise is approximately linear (1.7mm/year or less) from about 1850, to the present. The retreat of many glaciers in the world began from about 1800-1850, not after 1946, when CO2 began to increase rapidly. When discussing the present warming, we should not ignore the LIA and its recovery.

The only complication is that the multi-decadal oscillation, of the amplitude  ~0.2°C and a period of about 60 years, is superposed on the linear change. It peaked in about 1940 and 2000. After 1940, the temperature change was negative until 1975, so a similar negative trend may continue until about 2030. This may explain the present halting of the temperature rise. The inferred temperature increase by 2100 is about + 0.5°C±0.2°C, depending on the phase of the multi-decadal oscillation.

When does the recovery end ?  First of all, there is, unfortunately, no baseline to determine it. Both the Medieval Warm period and the LIA were relatively minor fluctuations during the last 10,000 years. Secondly, the cause of the LIA is not known. The cosmic-ray data (C14 and Be10) suggest that solar activity was relatively low from about 1200 to 1800 (including the Maunder Minimum) and started to increase after 1800. However, we are still uncertain about what changes of the Sun may cause cosmic-ray changes, and we do not know what intrinsic changes of the Sun cause climate change on the Earth. The attached figure summarizes the above discussion. 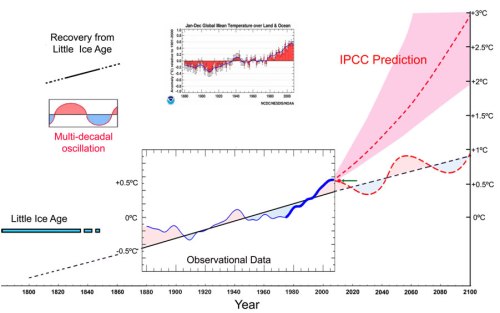 Figure Caption:  The figure shows that the linear trend between 1880 and 2000 is a continuation of the recovery from the LIA, together with the superposed multi-decadal oscillation. It is assumed that the recovery from the LIA would continue to 2100, together with the superposed multi-decadal oscillation.  This view could explain the halting of the warming after 2000.  The observed temperature in 2008 is shown by a red dot with a green arrow. It also shows the temperature rise after 2000 predicted by the IPCC. It has been suggested by the IPCC that the thick blue line portion was caused mostly by the greenhouse effect, so the IPCC’s future prediction is a sort of extension of the blue line.