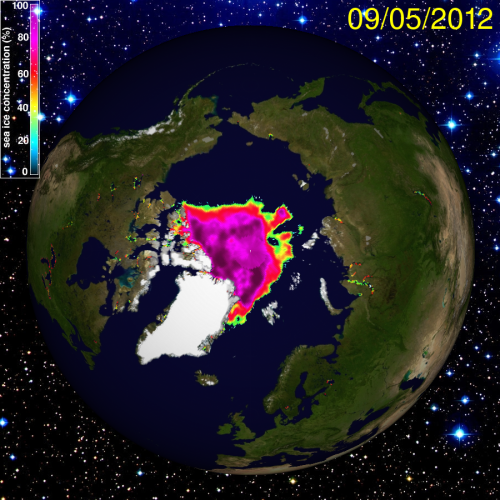 There is a provocative new study reported by Susan Watts of the BCC. It is titled [highlight added]

and includes the text

Prof Wadhams calculates this absorption of the sun’s rays is having an effect “the equivalent of about 20 years of additional CO2 being added by man”.

“The difference, the extra radiation that’s absorbed is, from our calculations, the equivalent of about 20 years of additional CO2 being added by man,” Prof Wadhams said.

If his calculations are correct then that means that over recent decades the melting of the Arctic ice cap has put as much heat into the system as all the CO2 we have generated in that time.

However, what Peter Wadhams did not report is that IF, as a result of a reduction of surface albedo, the reduction in the Arctic ice cap has put as much heat into the system as all the CO2 we have generated in that time, it means that the radiative warming contribution of added CO2 over recent decades, as diagnosed by upper surface heat content, a global average surface temperature anomaly, a lower tropospheric temperature anomaly, etc, has been significantly overstated.

It is certainly plausible that the radiative effect of added CO2 has contributed to the melting of the Arctic sea ice, but its contribution to global average warming is less than  reported by the IPCC.

Rather than “massively compounding the effects of greenhouse gas emissions” as Peter Wadhams states, if he is correct on the effect of the albedo reduction due to loss of sea ice on the global average radiative forcing, he has reduced the importance of added CO2 as a global average radiative forcing as diagnosed from observations and from models, and reported in the 2007 IPCC report.

With respect to the magnitude of Arctic warming, colleagues of  mine and I are in the process of completing a paper in which this will be a component. From the analysis of NCEP reanalysis lower tropospheric temperatures (completed by Emily Gill of the University of Colorado at Boulder), the June, July and August warming since 1979 has been +1.0 C, and since 1998 +0.5 to +0.6 C in the region from 60N and from 70N to the pole.  Whether this warming can explain the Arctic sea ice melting needs further exploration but it seems relatively small as a response to both added CO2 and/or the reduced albedo.  We will have more details on this paper when ready.