Global Temperature Report: July 2012 From The University Of Alabama At Huntsville

The July 2012 lower tropospheric temperature analyses are now available (thanks as usual to Phillip Gentry!) 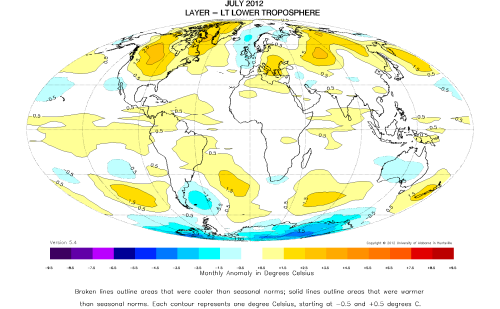 Compared to global seasonal norms, July 2012 was the coolest July since 2008, according to Dr. John Christy, a professor of atmospheric science and director of the Earth System Science Center at The University of Alabama in Huntsville.

Compared to seasonal norms, the coldest spot on the globe in July was the South Pole, where winter temperatures averaged 4.5 C (8.1 degrees F) colder than normal. If it isn’t usually the coldest place on Earth in July, seeing temperatures during the deepest part of the Antarctic winter that much colder than normal might move the South Pole into that spot. By comparison, the “warmest” place on Earth in July was in northeastern Alberta, Canada. Temperatures there averaged 3.43 C (about 6.2 degrees F) warmer than normal for the month.

The processed temperature data is available on-line at:

As part of an ongoing joint project between UAHuntsville, NOAA and NASA, John Christy, a professor of atmospheric science and director of the Earth System Science Center (ESSC) at The University of Alabama in Huntsville, and Dr. Roy Spencer, an ESSC principal scientist, use data gathered by advanced microwave sounding units on NOAA and NASA satellites to get accurate temperature readings for almost all regions of the Earth. This includes remote desert, ocean and rain forest areas where reliable climate data are not otherwise available.

The satellite-based instruments measure the temperature of the atmosphere from the surface up to an altitude of about eight kilometers above sea level. Once the monthly temperature data is collected and processed, it is placed in a “public” computer file for immediate access by atmospheric scientists in the U.S. and abroad.

Neither Christy nor Spencer receives any research support or funding from oil, coal or industrial companies or organizations, or from any private or special interest groups. All of their climate research funding comes from federal and state grants or contracts.

Comments Off on Global Temperature Report: July 2012 From The University Of Alabama At Huntsville