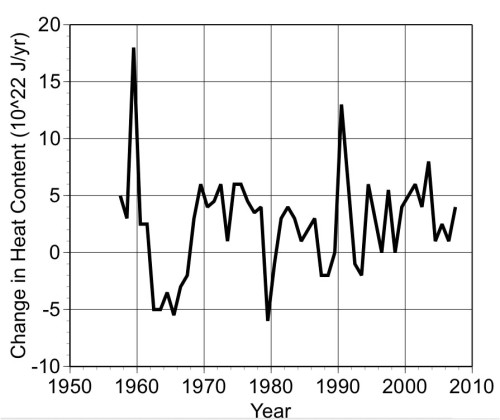 Donald Rapp (see the post on his book – The Climate Debate) sent me the two figures above with the note below. It is an interesting presentation of the Levitus et al (2012) analysis data, which I felt was informative. I am presenting here with his approval.  His e-mail transmitting the information follows. The Levitus et al 2012 paper is

which I have posted on several times; e.g. see

The Overstatement Of Certainty In The Levitus Et Al 2012 Paper

You might find this interesting. If you take the integrated data of Levitus et al (2012) and differentiate it by painstakingly fitting straight lines to adjacent years, you get the attached curve (vertical scale is in 10^22 J/yr). The average was 0.5 x 10^22 over this time period and since the early 1990s when there was 100% coverage, there was no sign of any acceleration.