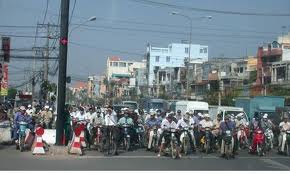 Fragkias, F. and K.C. Seto, 2012: The rise and rise of urban expansion Urban land area has expanded globally during the past few decades – a trend that looks set to continue in the foreseeable future. IGBP Newsletter, 78. March 2012

that documents the dynamic character of urbanization. This land use change not only affects local and regional climate, but also results in a time varying effect on surface temperatures that have been used by the IPCC and others as the iconic metric of global warming. As we reported on in

This bias is only going to increase in coming years as urban areas continue to expand.

The press release on the article has the title

Cities expand by area equal to France, Germany and Spain combined in less than 20 years

Unless development patterns change, by 2030 humanity’s urban footprint will occupy an additional 1.5 million square kilometres – comparable to the combined territories of France, Germany and Spain, say experts at a major international science meeting underway in London.

UN estimates show human population growing from 7 billion today to 9 billion by 2050, translating into some 1 million more people expected on average each week for the next 38 years, with most of that increase anticipated in urban centres. And ongoing migration from rural to urban living could see world cities receive yet another 1 billion additional people. Total forecast urban population in 2050: 6.3 billion (up from 3.5 billion today).

Fragkias [Dr. Michail Fragkias of Arizona State University] notes that while there were fewer than 20 cities of 1 million or more a century ago, there are 450 today. While urban areas cover less than five per cent of Earth’s land surface, “the enlarged urban footprint forecast is far more significant proportionally when vast uninhabitable polar, desert and mountain regions, the world breadbasket plains and other prime agricultural land and protected areas are subtracted from the calculation.”

“….the Anthropocene isn’t as well known as global warming, which two out of three people had heard of by 2008, according to a Gallop Poll (http://www.gallup.com/ poll/117772/Awareness-Opinions-Global-Warming-Vary-Worldwide.aspx). But the former is a more effective paradigm in describing the cumulative impact of civilisation, making global warming and its consequences but one of many ways in which humans have modified the Earth. Narrow focus on global warming might suggest that we simply need to stop emitting greenhouse gases and use renewable energy to abate the planet’s pressures. The human footprint is much larger than that.

This is the viewpoint that we presented in our article

The new IPCC reprts should heed this growing call for a broader, more complete assessment of threats to the enviroment and society, rather than their scientifically flawed focus on the radiative effects of CO2 and a few other greenhouse gases.

Comments Off on 2012 IGBP Article “Cities Expand By Area Equal To France, Germany And Spain Combined In Less Than 20 years”