Today in the New York Times [h/t to Watts Up With That, there is an op-ed by Jim Hansen of NASA GISS titled

Game Over for the Climate

The global warming signal is now louder than the noise of random weather, as I predicted would happen by now in the journal Science in 1981.

I have posted on his prediction in

Comments On The Poor Post “Lessons from Past Predictions: Hansen 1981″ By Dana1981 At The Skeptical Science

As reported in the Levitus et al 2012 paper [highlight added]

This is a discrepancy of ~2 between his prediction and the analysis of Levitus et al 2012 if the latter observational analysis is correct.

He is correct that the climate system has warmed. However, he  is significantly overstating its magnitude. While one possibility is that the rate increased after 1993 compared to earlier in the 1955-2010 period, but visually (using the eyecrometer) this does not seem to be the case. Moreover, the Levitus et al 2012 may be overstating the magnitude of recent upper ocean heating as clearly seen in the figure below from NOAA’s Pacific Marine Environmental Laboratory 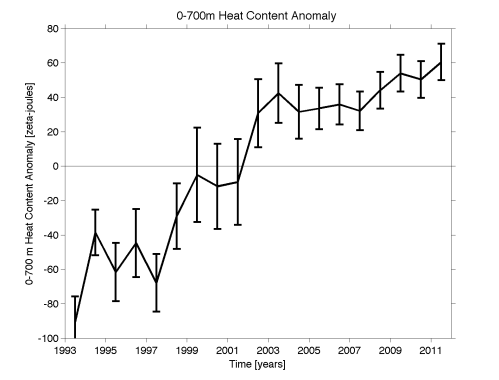 Lets see if Jim, Gavin Schmidt, or other weblogs that communicate his viewpoint, such as Grant Foster at Tamino and Skeptical Science, respond to this observational study that illustrates a substantive disagreement with the climate model prediction of global warming.  So far they have ignored this disparity between the real world and the models.