Debate On The “Climate Dice” Issue 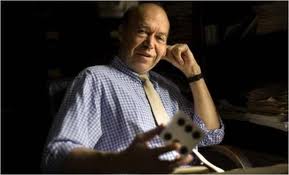 source of image from Revkin.net

There is an informative discussion ongoing at the weblog

regarding the “climate dice” issue that Jim Hansen has introduced. As written on The Conversation in their post on April 17 2012 by Ben Newell who is an Associate Investigator at the ARC Centre of Excellence in Climate Systems Science;

If you want to roll the climate dice, you should know the odds

This “climate dice” analogy has been used in a recent paper by James Hansen and colleagues to demonstrate how over the past 30 years the dice have become “progressively loaded”. There is no longer equal chances of warm, cool, or average seasons.

Dear Dr Pielke and Dr Hansen,  I would be interested in comments from both of you for public posting  concerning the following comments made on an Australian website called The  Conversation.

Specifically Dr Hansen’s 1981 paper was mentioned to provide credence to  the suggestion that climate models are performing skillfully. I note this  paper has received some attention in the press recently and resulted in a  blog post by Dr Pielke Snr pointing out the following about the model  outputs:

However, the latest available global average lower tropospheric temperature  anomaly (see) is only +0.11 C above the 30 year average. Over this time  period, the Hansen figure shows an expected change anomaly of ~+0.5c.

The trend has also been essentially flat since 2002. The Hansen figure  indicates the current change since 2002 should be almost +0.2C.”

The following response [by Nick Kermode] to this was elicited at The Conversation:

Marc, Mr. Pielke Snr. would have done well to actually read Hansens paper  rather than just a newspaper article. Making a statement like “If the  warming were due to added CO2 and other greenhouse gases, the lower  tropospheric temperatures would have warmed at least as much” shows he  clearly hasn’t. In his paper Hansen specifically says the troposphere  should not have responded yet. So his temp. predictions are pretty close  and he is ALSO right about the troposphere. Have a read, amazing it was  written 30 years ago!  https://theconversation.edu.au/if-you-want-to-roll-the-climate-dice-you-should-know-the-odds-6462#comment_32633

Can either of you comment. Dr Hansen I cannot find anywhere in your paper  reference to  a statement that suggest “the troposphere should not have  responded yet“. Indeed it seems this would go against the basic science for  a transient response to increased CO2.

My reply, posted on The Conversation, was

Thank you for the opportunity to add to the discussion. The troposphere clearly should not have a lag in the heating, as we discuss, for instance in our papers

As we report in the second paper, Gavin Schmidt, who works with Jim, has provided online model results of an amplification of 1.1 over land and 1.6 over the oceans. The surface and lower troposphere are clearly connected in terms of warming in the model results.

in a response to a comment by John Christy and I in 2005 [https://pielkeclimatesci.files.wordpress.com/2009/09/hansen-science.pdf]

The end of the decade refers to the 1990s. If this finding were robust, we would expect heating to occur in the lower troposphere in recent years.

Please let me know if you would like further input on this question.

I look forward to seeing how Jim Hansen (or Gavin Schmidt) responds to Marc’s inquiry, and will post if they do.

Comments Off on Debate On The “Climate Dice” Issue