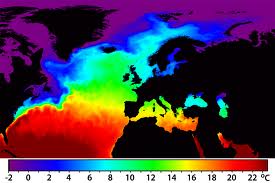 “…… the spatial mean and the spatial gradient of the aerosol radiative forcing in comparison with those of well-mixed greenhouse gases (GHG). Unlike GHG, aerosols have much greater spatial heterogeneity in their radiative forcing. The heterogeneous diabatic heating can modulate the gradient in horizontal pressure field and atmospheric circulations, thus altering the regional climate.”

A new Nature paper supports our finding. This paper is

The paper is discussed in a companion article

“….that aerosols may have regional effects as great as those caused by the global increase in atmospheric carbon dioxide. Booth and colleagues’ work underscores the importance of understanding the diverse pathways by which humans alter the climate.”

While, I view the Booth et al study as a model sensitivity examination (not an attribution study), since they cannot actually assess the real world contribution from natural variability using just models, it is a demonstration of the importance of regional circulations, and the role of heterogenous forcings (including from human activity) in influencing these circulations.

There is a fundamental flaw in their article, however, in that they acknowledge that, in the absence of aerosol forcing,

“…climate models have so far failed to reproduce these interactions”.

Judy Curry has an excellent post on this paper in

where I agree with her that, as a definitive finding on the dominance of human aerosol forcing as an explanation for North Atlantic climate variability,

Color me unconvinced by this paper.  I suspect that if this paper had been submitted to J. Geophysical Research or J. Climate, it would have been rejected.

Nonetheless, as a demonstration of the importance of human climate forcings that are regionally heterogenous, this is an informative study. It should have been written, however, as a sensitivity experiment not as an attribution study since the multi-decadal model simulations have not shown skill at predicting North Atlantic climate pattern variations prior to significant human climate forcings.

“Regional variations in radiative forcing may have important regional and global climatic implications that are not resolved by the concept of global mean radiative forcing. Tropospheric aerosols and landscape changes have particularly heterogeneous forcings…..Regional diabatic heating can also cause atmospheric teleconnections that influence regional climate thousands of kilometers away from the point of forcing.”

The Booth et al and Amato articles build on the conclusion that was reached in the 2005 NRC report (and which was essentially ignored in the 2007 IPCC report), although they made the typical IPCC mistake, as Judy Curry noted in her post, of assuming that the model results are reality and not just a sensitivity set of model experiments.