This figure is from the Rutgers Snow Lab and is the snow cover for February 3 2012.

In the 2007 IPCC WG1 report in the Statement for Policymakers, they wrote

“…… snow cover [has] declined on average in both hemispheres…..”

“….decreased snowpack and snow cover have… been linked to droughts.”

A highlighted finding in the Statement for Policymakers reads

“Warming of the climate system is unequivocal, as is now evident from observations of …….widespread melting of snow and ice….”

There comment is based on the figure they present which is reproduced below (the bottom figure is the snow cover). The part of the figure caption with respect to the figure reads

However, the real world data tells us something different with respect to Northern Hemisphere snow cover when we look at other winter months.

The best source of this information is from the Rutgers University Global Snow Lab, directed by Dave Robinson. I have reproduced the tabular plots of the Northern Hemisphere monthly snow cover anomaly below from the excellent Rutgers website for December through April. 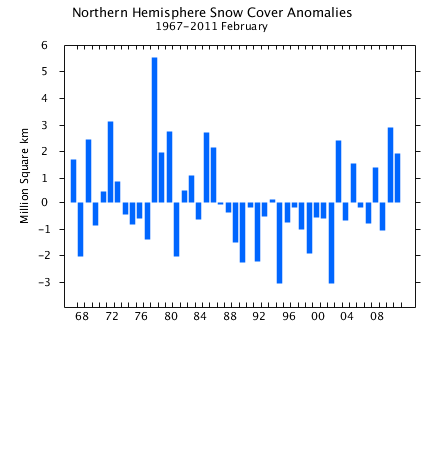 While until last March (2011), and in April even through 2011, there clearly is a trend to negative anomalies, the earlier winter months show no such trend. The 2007 IPCC Statement for Policymakers did not completely report on Northern Hemisphere snow cover trends for their report. They need to more honestly present the entire observational findings in their next Statement for Policymakers.