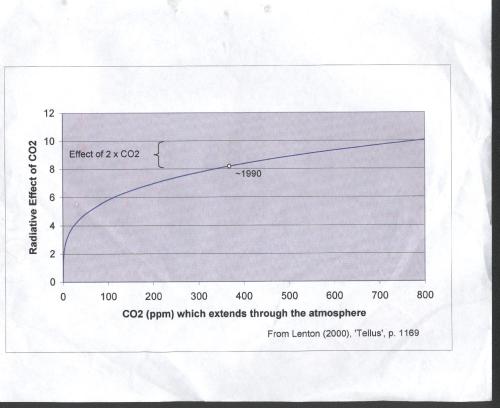 The curve used in the model provides an effective way to illustrate the change of the radiative effect of CO2 as its atmospheric concentration is elevated. While the water vapor overlap is not included, the figure shows the reduction in the increase of its forcing as a function of concentration. This does, not, of course, mean that we should not be concerned with this increase (and as I have written, it is the incompletely know biogeochemical effect of added CO2 which is likely of more concern; e.g. see). However, it does provide a perspective to any claims that the  doubling of CO2 means that the effect from going from a zero concentration to the current value to a doubling of CO2 results in twice the effect.

What Fraction of Global Warming is Due to the Radiative Forcing of Increased Atmospheric Concentrations of CO2? [the text is slightly garbled as I have since 2006 switched the program that processes my weblog].

we presented results by Norm Woods (who works with Graeme Stephens) on the magnitude of radiative forcing for three types of vertical temperature and moisture soundings (tropical; winter subarctic and summer subarctic). Climate Science has summarized this study in the past (e.g., see the May 5th blog entitled Relative Roles of CO2 and Water Vapor in Radiative Forcing).

This weblog presents further analyses of these soundings by Norm Woods.

The total forcings are evaluated as the increase in flux convergence at the tropopause, and also divided these into the atmospheric and surface portions. As before, these results are for a change from 280 to 560 ppmv of CO2 [Norm presented this values with the same precision as the model output to show that they balanced]. 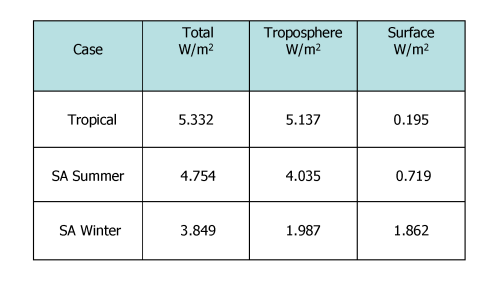 Among the interesting results that he found is that the subarctic winter has the weakest total forcing, but the greatest surface forcing. 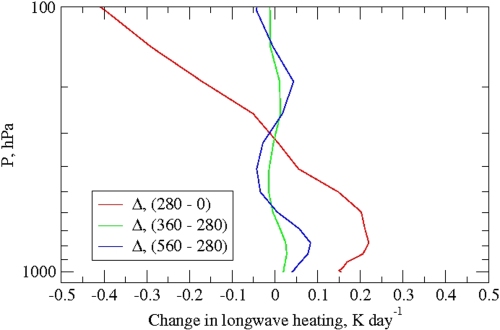 These results illustrate why presenting a single number of radiative forcing as a metric of climate change (such as given in Figure SPM.2 in the 2007 WG1 Statement for Policymakers of the IPCC) is a poor way to assess how the radiative forcing of CO2 and water vapor actually affect weather and other aspects of the climate system. Both the regional and vertical forcing vary geographically and with season, and obviously a global average top of the atmosphere radiative forcing does not capture this important heterogeneity in the climate forcings (also see).