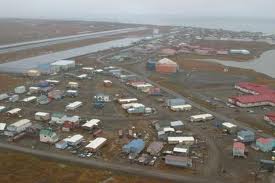 This article starts with the text [highlight added]

The U.S. Department of Energy (DOE) is embarking on a $100-million research program to investigate what will happen to the 1,500 billion tonnes of organic carbon locked up in frozen soils of the far northern permafrost when they thaw in the rapidly warming Arctic climate.

The program, called the Next-Generation Ecosystem Experiments–Arctic (NGEE), is designed to develop a fine-scale model that can simulate how soil microbes, plants and groundwater interact on the scale of centimeters to tens of meters, to control the amount of organic carbon stored underground in the permafrost zone. That model will be incorporated into the planetary-scale Earth-system models used to forecast how climate evolves under different emissions scenarios.

“Our ability to model greenhouse gases and vegetation dynamics is inadequate in today’s environment, and when we think out 50 to 100 years, that entire landscape is going to evolve and be much more complex,” says Stan Wullschleger, the principal investigator for NGEE and a plant ecologist at Oak Ridge National Laboratory in Tennessee.

The program, which involves about 50 scientists, is a collaboration between the energy department’s national laboratories and the University of Alaska Fairbanks. The project started in October and the team presented its plan to the general geoscience community this month at the American Geophysical Union meeting in San Francisco, Calif. The NGEE team will set up its first research site near Barrow, Alaska, and will then incorporate other sites in different parts of the state….

The permafrost program represents a new direction for the U.S. energy department. For much of the past two decades, the DOE’s main ecosystem project was the Free-Air Carbon Dioxide Enrichment experiments, in which researchers dosed plots of land with elevated levels of carbon dioxide to see how plants responded. The department announced in 2008 that it was phasing out those experiments.

Ted Schuur, an ecosystem ecologist at the University of Florida in Gainesville who studies Arctic permafrost, says that the DOE program will inject welcome money and researchers into a field that has lacked both. “They’re bringing a lot of resources to bear on an important problem,” says Schuur, who reviewed the proposal for the program and serves on the NGEE advisory board.

Terrestrial ecosystems play important roles in Earth’s climate and its response to change, potentially enhancing or lessening the effects of that change. Among these roles is the ability to absorb and store carbon from the atmosphere, which reduces greenhouse e!ect impacts. Carbon also can be released back to the atmosphere or stored as ecosystems alter their biological properties in response to disturbances such as climate change. Key questions include:

Understanding and predicting terrestrial ecosystem responses to climate change are crucial for managing and informing U.S. energy challenges and improving confidence in climate model projections. Decision makers and the public require this fundamental scientific understanding to plan for, mitigate, and adapt to a changing climate.

Characterized by vast amounts of carbon stored in permafrost and a rapidly evolving landscape, the Arctic has emerged as an important focal point for the study of climate change. These are sensitive systems, yet the mechanisms responsible for those sensitivities are not well understood and many remain uncertain in terms of their representation in models. Increasing our confidence in climate projections for high-latitude regions of the world will require a coordinated set of investigations that explicitly target improved process understanding and model representation of important ecosystem-climate feedbacks.

The Next-Generation Ecosystem Experiments (NGEE) project will use observations and models to quantify the response of physical, ecological, and biogeochemical processes to climatic change across molecular to landscape scales. Our approach addresses how permafrost degradation in a warming Arctic, and the associated changes in landscape evolution, hydrology, soil biogeochemical processes, and plant community succession, will affect feedbacks to the climate system. Field and lab research will focus on interactions that drive ecosystem-climate feedbacks through greenhouse gas fluxes and changes in surface energy balance. These feedbacks will arise due to gradual thawing of permafrost and thickening of the seasonal active layer. Feedbacks will also occur as a result of the threshold-dominated processes of permafrost degradation and thermokarst formation and through the many processes that are influenced as a result of these landscape-scale dynamics. Our approach will consider how components of complex systems are linked and the interplay in space and time that determines system behavior. Fundamental knowledge gained in these investigations will be used to improve representation of ecosystem dynamics, subsurface biogeochemistry, and land-atmosphere processes in regional and global models, and will reduce uncertainty and improve prediction of climate change in high-latitude ecosystems.

The research scope of NGEE Phase 1 is designed to address our overarching science question through a series of integrated field observations, lab experiments, and modeling activities. Permafrost degradation and its impact on water, nitrogen, carbon, and energy-related processes will be investigated across a hierarchy of scales, including the pore/core, plot, and landscape scales. Field research will be conducted in Alaska on the North Slope (Barrow) and Seward Peninsula (Council). Phase 1 modeling efforts will focus on application of existing models to evaluate their predictive capability across a range of spatial scales, from single-column to plot to landscape scales. Model results will be compared with laboratory experiments and field observations at the Barrow and Council sites. We will simulate permafrost degradation in a warming Arctic using the land surface component of a major climate prediction model as well as several high-resolution process-resolving models of subsurface physical and biological dynamics. These integrated experimental and modeling efforts will (1) quantify how permafrost degradation influences surface and subsurface hydrology, (2) resolve biogeochemical mechanisms that control rates of CO2 and CH4 flux, (3) characterize the role of nitrogen availability in shrub expansion and plant productivity, (4) identify mechanisms underlying changes in ecosystem net energy budgets due to vegetation dynamics, and (5) quantify prediction capabilities associated with existing models.

Insights gained in Phase 1 will be used to address the challenge of extrapolating process studies to larger grid scales of climate models and to sharpen our scientific hypotheses about physical, chemical, and biological processes that shape the structure and function of Arctic ecosystems. Phase 2 will expand to include process-level studies at plot to landscape scales along a bio-climate gradient with Barrow and Council serving as the north and south members, respectively, of that latitudinal transect. Phase 2 modeling effort will focus on design and implementation of a new Arctic process-resolving land simulator for inclusion in regional and global climate models, building on strengths and improving on the weaknesses of existing models as identified in Phase 1. Our goal throughout the NGEE project will be to provide the underpinning science and process understanding required to develop a new generation of high-resolution land surface simulation capabilities for the Arctic

My Comment: I am certainly supportive of research to improve our understanding of climate processes. However, not only does this amount of money seem very excessive, but their statement that

“….. predicting terrestrial ecosystem responses to climate change are crucial for managing and informing U.S. energy challenges …….. Decision makers and the public require this fundamental scientific understanding to plan for, mitigate, and adapt to a changing climate.”

is yet another example of misusing the scientific process to promote an agenda (in this case U.S. energy challenges).  Decision makers already have all the information regarding the climate system that is needed to make policy decisions.  If the 100 million dollars are being used for this purpose, in my view, it is a waste of funds.

Comments Off on A 100 million dollar Climate DOE Project – Is This Money Well Spent?