What Climategate 2.0 Says About The Prediction Of Multi-Decadal Regional Climate Change 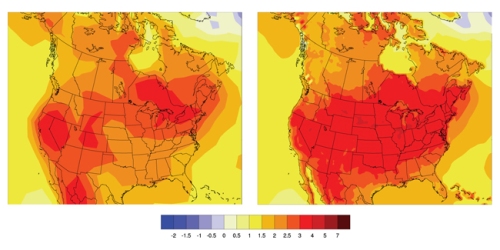 On The Slow, Painful (and Deadly) Demise Of The IPCC

at the weblog The Unbearable Nakedness of Climate Change

Their post involves the discussion of the predictive skill of multi-decadal regional climate change. It is essential to recall that the climate models must not only be able to skillfully predict current climate statistics but also how these statistics would change due to the human intervention of the climate system.

Vast amounts of money are being spent (and wasted) claiming that such multi-decadal climate change predictions are accurate and can be used by the impacts community. See, for example, my recent post

I have reproduced  On The Slow, Painful (and Deadly) Demise Of The IPCC post below, including retaining the highlighted text.

Climategate 2.0 is helping filling some knowledge gaps, for example in the way the IPCC has been slowing killing itself, and several thousands humans to. The following concerns Regional Projections, and it’s a tragedy of communication.

Willingly or not, the IPCC has become a source of deadly confusion exactly because it has provided the information its audience wanted, even if it was scientifically unprepared to prepare that information.

It’s the year 2000 and the IPCC Third Assessment Report (TAR) is being prepared. As we can see in file 0598.txt, there is a frank exchange of opinions about WG1-Chapter 10 “Regional Climate Information – Evaluation and Projections”, between Filippo Giorgi (Coordinating Lead Author), Hans Von Storch (Lead Author), Jens H. Christensen (Lead Author) (my emphasis of course):

Under the “encouragement” of Sir John, we also decided to add a text box on what we can say about regional climate change over different continents. This will probably be the most-read part of the chapter, so we need to be very careful with it. I and Peter will produce a draft to circulate. I know that originally we did not want to do this, but this is what they are asking us to do and it is now very clear that it is the main purpose of the chapter, so we have to do it.

First, I don’t think that John Houghton is particularly qualified in saying anything about regional assessments. So far as I know he has no relevant official capacity in the process,and he has not been particularly helpful in SAR. Actually, I consider him a politically interested activist and not as a scientist.[…] I do not agree [about adding the text box]. What were the arguments we originally did not want to do this? What are the new arguments overriding our previous concerns? I am sure that people would love to read this statement in New York Times. We don’t feel confident to make a statement, and then, suddenly, under the encouragement of Sir John, we include it? This is truly embarrassing. If the purpose of the Chapter is to produce statements on regions, and we found we can not do that, what should the assessment be? Simply: “We can not do it at this time, but we have a variety of techniques to derive scenarios. However, for various reasons, we can not say that they are consistent, even if there is some convergence.”

This is an important point […] In my eyes Sir John represents the typical reader of this report and if he made that comment and “encouragement” it means that our chapter is not sending the proper message (after all he is one of the chairs of IPCC WGI). You may remember that I was always of the opinion that we were talking too much about techniques and too little about climate change. Now I think that we need to change that to the extent possible: reduce technical issues, increase climate change information. We actually already have a lot of that information in there, especially in the AOGCM part. What Sir John asked was to make it more “legible”, and we decided in Auckland to make it in the form of a box. We cannot invent information of course, but we can condense it in this box by including 1) the info relative to what AOGCMs sy for different continent, which is already there; 2) all possible other info from the techniques. If there is none or if we can say nothing we’ll say we cannot do it for that specific region. but I think we need to do something because the way it is, the chapter does not address the right audience, which is not only made up only of scientists.

AGAIN, I WOULD LIKE TO KNOW FROM ALL OF YOU WHETHER WE SHOULD HAVE A BOX IN THERE WITH INFORMATION FOR REGIONS OR NOT. I DO BELIEVE THAT THIS WOULD BE THE MOST READ PART OF THE CHAPTER, WHICH WOULD BE A PROOF THAT NOW WE ARE MISSING THE TARGET. SO LET EVERYONE ELSE KNOW.

I just want to add my opinion on this. I do agree with the point that we have to offer the regional information available. By setting up the box with the regions, we will provide the obvious assessment over many regions, which Hans has put forward so simple: The quality of the global models are too poor to give any clear information about regional climate change. We can state for the various regions, where there is some information, to what extend there is agreement between models etc. However, even agreement amongst models does not at this stage allow for any thorough assessment about uncertainties about changes. This must come out crystal clear, even if this will be the message for all regions! At least we will make out point about assessing regional climate change very clear this way.

Introduction This box summarises results on regional climate change obtained from a set of nine AOGCM simulations undertaken using SRES preliminary marker emission scenarios A2 and B2. […].These results should be treated as preliminary only.

However, Christensen’s cautionary suggestion is totally reversed, and agreement among models is seen as a measure of certainty of changes “relatively speaking”:

Agreement across the different scenarios and climate models suggests, relatively speaking, less uncertainty about the nature of regional climate change than where there is disagreement

It’s now 2007. The equivalent chapter is AR4 WG 1-Chapter 11 “Regional Climate Projections“. Christensen is now a Coordinating Lead Author, Giorgi a Review Editor. And what has happened to the chapter?

Giorgi’s “target” has been achieved. The “most read part in the chapter” has become the whole chapter. A description of the current knowledge has become less important than providing what people asked. The audience has won, and the science has lost.
Then it gets worse.
Even in 2007, regional changes described by the IPCC are for the 2080-2099. Captions are very explicit on the subject. For example look IPCC AR4 WG1 report, section 11.2  about Africa. In particular, figure 11-2 is about “Temperature and precipitation changes over Africa from the MMD-A1B simulations“. Both in the text and in the caption, the projected time period of 2080-2099 is clearly indicated.
In 2011 however, Chris Funk feels compelled to write a column for Nature, published on Aug 3 as “We thought trouble was coming“, describing “how his group last year forecast the drought in Somalia that is now turning into famine — and how that warning wasn’t enough” and in particular lamenting that
The global climate models used by the Intergovernmental Panel on Climate Change were never intended to provide rainfall trend projections for every region. These models say that East Africa will become wetter, yet observations show substantial declines in spring rainfall in recent years. Despite this, several agencies are building long-term plans on the basis of the forecast of wetter conditions..

Those agencies might have foolishly misunderstood the IPCC message. Perhaps, they believe too much in it, missing therefore the small print indicating wetter conditions are expected 70 years since.

And so we have gone full circle. Originally provided by scientists ready to stretch the science on the “encouragement” by Sir John Houghton, in the space of a single decade Regional Projections have gone on to become an unwittingly deadly tool.

As added information, I was invited to serve as one of the contributing authors of the regional modeling part of the 1995 IPCC report [of which Fillipo Giorgi was also involved with]. I resigned from the IPCC as documented in the letter below (see also my post on this letter)

The erroneous IPCC presentation of multi-decadal regional climate prediction skill continues today (2011).  The views I expressed in the letter are further bolstered by these Climategate 2.0 e-mails.

Comments Off on What Climategate 2.0 Says About The Prediction Of Multi-Decadal Regional Climate Change