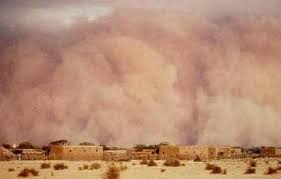 There is a new paper that further confirms the importance of the heterogeneous effect of diabatic heating from aerosols, this time from dust, on atmospheric and ocean circulation patterns. We presented the need to assess this regional climate forcing in our paper

It also confirms the role of human land use change in creating some of this dust.

“The dominant source of coupled ocean–atmosphere variability in the tropical Atlantic is the so-called Atlantic Meridional Mode. This mode of variability is characterized by an interhemispheric gradient in sea surface temperatures and by oscillations in the strength of surface winds that cross the Equator, thereby reinforcing sea surface temperature anomalies.  The Atlantic Meridional Mode is thermodynamically damped and must receive external forcing to persist as observed. However, it is not known which external forcing factors have excited the Atlantic Meridional Mode in the historical record. Here we present simulations with an ocean general circulation model that is forced by a record of surface radiation from anomalous dust concentrations in the atmosphere, reconstructed from a coral proxy and satellite retrievals. We show that the Atlantic Meridional Mode is excited by variability in African dust outbreaks on interannual to decadal timescales. Our analysis indicates that sea surface temperature anomalies resulting from the aerosol direct effect persist in time through the positive ocean–atmosphere feedback that defines the Atlantic Meridional Mode. We conclude that on interannual to decadal timescales, the state of the tropical Atlantic ocean is directly tied to dust emissions overWestAfrica, which in turn are linked to land-use change.”

The conclusion contains the text

“….anthropogenic land use has played a role in augmenting African dust emissions, although by what amount is uncertain.Thus, human activity is already altering regional climate through the dust-ocean-atmosphere interactions shown here. Furthermore, in the future, carbon dioxide fertilization may lead to shrinking desert areas and a decrease in African dust outbreaks, and therefore more favourable conditions for hurricanes to form and intensify through anomalous dust forcing of the AMM.”