Comments On The New Paper “Separating Signal And Noise In Atmospheric Temperature Changes: The Importance Of Timescale” By Santer Et Al 2011 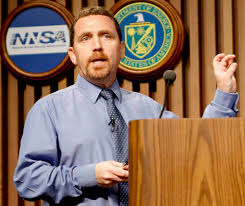 There is a new paper that compares multi-decadal global model predictions with observed temperature data. It is

This is an unusual number of co-authors for a technical paper, but I assume Ben Santer wants to show a broad agreement with his findings.

Regardless, the paper is an interesting and important contribution to the scientific exploration of the robustness of the multi-decadal global climate models to predict lower tropospheric temperature changes. I have several substantive comments, however, which are given after I introduce the paper further.

We compare global-scale changes in satellite estimates of the temperature of the lower troposphere (TLT) with model simulations of forced and unforced TLT changes. While previous work has focused on a single period of record, we select analysis timescales ranging from 10 to 32 years, and then compare all possible observed TLT trends on each timescale with corresponding multi-model distributions of forced and unforced trends. We use observed estimates of the signal component of TLT changes and model estimates of climate noise to calculate timescale-dependent signal-to-noise ratios (S/N). These ratios are small (less than 1) on the 10-year timescale, increasing to more than 3.9 for 32-year trends. This large change in S/N is primarily due to a decrease in the amplitude of internally generated variability with increasing trend length. Because of the pronounced effect of interannual noise on decadal trends, a multi-model ensemble of anthropogenically-forced simulations displays many 10-year periods with little warming. A single decade of observational TLT data is therefore inadequate for identifying a slowly evolving anthropogenic warming signal. Our results show that temperature records of at least 17 years in length are required for identifying human effects on global-mean tropospheric temperature.

We relied on control runs from the CMIP-3 multi-model archive for our estimates of climate noise. Estimates of externally forced climate-change signals were obtained from three different sets of satellite-based observations and from CMIP-3 simulations of 20th and 21st-century climate change. In contrast to almost all previous work, we compared modeled and observed TLT changes on multiple timescales (using maximally overlapping trends) rather than over a single period of record. For timescales less than the record length, this strategy reduces the impact of climate noise on estimates of the signal component of observed (and simulated) temperature trends. The fact that our pf′ values (even for 30-year TLT trends) are sensitive to the addition of a single year of observational data (see Figure 6E) indicates the dangers of ignoring the effects of interannual variability on signal estimates, as was done, for example, in Douglass et al. [2007].

Trends are computed for different time periods (e.g. see figure 2 in Christy et al 2010), and should have been compared with the model predictions.

Also, in our paper, we wrote

Though we shall examine the temperature trends of the various observational datasets to arrive at trend values, we note here that eventually we shall study the ratio of trends of TLT to Tsfc. This quantity has no formal name, but is often called a ―scaling ratio‖ (SR). The SR will be a key metric in this study since it carries with it the advantage of being a normalized metric. Because no climate model is able to simulate the exact progression of the major, natural fluctuations in the climate system such as El Niño’s which may strongly affect the secular trend over 20 to 30 year periods, the SR is able to reveal a more fundamental characteristic of how the TLT and Tsfc are related.

The failure of Santer et al to include a very relevant paper with respect to their analysis is one of the justifications for Wolfgang Wagner to resign from Remote Sensing in response to claims that Spencer and Braswell (S&B) ignored relevant papers that disagreed with S&B.

Because of the large effect of year-to-year variability on decadal trends, roughly 10% of the 10-year TLT trends in the 20CEN/A1B runs are less than zero (Figure 4A). This result shows that anthropogenically forced models can replicate the recent muted warming of the surface [Easterling et al., 2009; Knight et al., 2009] and the lower troposphere. Claims that minimal warming over a single decade undermine findings of a slowly-evolving externally-forced warming signal [e.g., as in Investor’s Business Daily, 2008; Happer, 2010] are simply incorrect.

My Comment:   This is quite an overstatement, as later in the paper (and in the abstract) Santer et al conclude that “….temperature records of at least 17 years in length are required for identifying human effects on global-mean tropospheric temperature.”   If one accepts this statement by Santer et al as correct, than what should have been written is that the observed lack of warming over a 10 years time period is still too short to definitely conclude that the model’s are failing to skillfully predict this aspect of the climate system.

On all timescales examined here, the TLT trends in the observational satellite datasets are not statistically unusual relative to model-based distributions of externally forced TLT trends (Figure 6E). While this consistency is encouraging, it should be qualified by noting that: 1) The multi-model average TLT trend is always larger than the average observed TLT trend (Figures 6A,F); 2) As the trend fitting period increases, values of pf decline, indicating that average observed trends are increasingly more unusual with respect to the multi-model distribution of forced trends (Figure 6E). Possible explanations for these results include the neglect of negative forcings in many of the CMIP-3 simulations of forced climate change (see Supporting Material, Table S1), omission of recent temporal changes in solar and volcanic forcing [Wigley, 2010; Kaufmann et al., 2011; Vernier et al., 2011; Solomon et al., 2011], forcing discontinuities at the ‘splice points’ between CMIP-3 simulations of 20th and 21st century climate change [Arblaster et al., 2011], model response errors, residual observational errors [Mears et al., 2011b], and an unusual manifestation of natural internal variability in the observations (see Figure 7A).

My Comment:  This is quite a set of caveats to their findings and should have been elevated into the abstract. In the caption to Figure 7, Santer et al write

The recent cooling near the end of observed TLT records is outside the ‘model average’ envelope of interannual variability.

In summary, because of the effects of natural internal climate variability, we do not expect each year to be inexorably warmer than the preceding year, or each decade to be warmer than the last decade, even in the presence of strong anthropogenic forcing of the climate system. The clear message from our signal-to-noise analysis is that multi-decadal records are required for identifying human effects on tropospheric temperature. Minimal warming over a single decade does not disprove the existence of a slowly-evolving anthropogenic warming signal.

My Comment:   I agree with Santer et al that “[m]inimal warming over a single decade does not disprove the existence of a slowly-evolving anthropogenic warming signal.”  However, while I completely agree with Santer et al that the addition of CO2 and other greenhouse gases is a positive long-term radiative forcing of the climate system, they did not recognize that the global average temperature trend in the lower troposphere has been nearly flat  as shown, for example, in the figure below from the RSS MSU data [the same data that is used in the Santer et al study]. The left bottom axis is the year 1979 and each tick mark is one year. The right bottom axis is 2012.  There has been NO long-term trend since the large El Nino in 1998.  That’s 13 years.

My Summary:  If I were a referee of the Santer et al paper, I certainly would have recommended to the Editor that the Christy et al 2010 paper would have been included and used as part of their analysis. I would also suggested that their cavaets regarding their findings be elevated in visibility. However, unlike the claim made by Wolfgang Wagner and others (e.g. see), I would have recommended it be published.

Comments Off on Comments On The New Paper “Separating Signal And Noise In Atmospheric Temperature Changes: The Importance Of Timescale” By Santer Et Al 2011