This record event is an effective test of two hypotheses.

Hypothesis #1:Roy Spencer’s  hypothesis on the role of circulation patterns in global warming (e.g. see) might explain most or all of the current anomaly since it clearly is spatially very variable, and its onset was so sudden. If the lower atmosphere cools again to its long term average or lower, this would support Roy’s viewpoint.

Hypothesis #2:  Alternatively, if the large anomaly persists, it will support the claims by the IPCC and others (e.g. see Cool Spells Normal in Warming World) that well-mixed greenhouse gas warming is the dominate climate forcing in the coming decades and is again causing global warming after the interruption of the last few years.

Only time will tell which is correct, however, we now have short term information to test the two hypotheses. The results of this real world test will certainly influence my viewpoint on climate science.

Since the warm anomalies persist (e.g. see and see; Fig 7),  the coming months are key to determining which of the two hypotheses with respect to global warming and cooling can be rejected. If we move into a La Niña without a corresponding cooling of the lower troposphere, it would support the rejection of hypothesis #1.  However, if the lower troposphere cools, in terms of anomalies, to at or below the long-term average, this would support the rejection of hypothesis #2.

Of course, the two hypotheses do not cover all of the possibilities. If the warm anomalies persist, this could be due primarily to other human climate forcings besides carbon dioxide, such as black carbon. However, this would still indicate hypothesis #1 should be rejected.

I will again revisit this topic in a few months.

The few months have passed and we have presented below the evolution of the lower temperature temperatures trends in 2010.  Clearly, hypothesis #1 is better supported than hypothesis #2.

Roy Spencer’s view of the role of atmospheric/ocean circulations in altering the global average temperatures has this observational support.  The relatively rapid return to the long-term average is consistent with a strong influence of these circulation features.

Certainly the fall off could have been even more rapid without the added greenhouse gases, and the magnitude of this effect should be investigated. Nonetheless, so far into current the La Niña, the major role of atmospheric and ocean circulations in influencing global warming and cooling as diagnosed by the global average lower tropospheric temperature anomaly is well supported by the observations. [I want to compare with the upper ocean anomalies also but so far, there has been no update to the Argo analyses]. 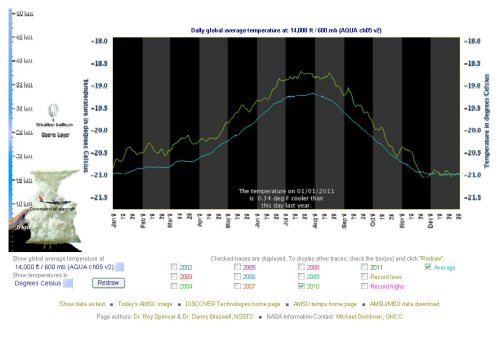