Phillip Gentry has provided us with the latest lower tropospheric temperature analysis from the University of Alabama at Huntsville MSU data [Aug. 3, 2010]. Their processed temperature data is available on-line at vortex.nsstc.uah.edu/data/msu/t2lt/uahncdc.lt. Their full news release is available here.

I want to comment here on the spatial analysis that they present.

The global spatial analysis, shown below, clearly documents the well above average temperatures associated with the western Russia heat wave, that has been reported in the media (e.g. see and see). One clear signal from this analysis is that the heat wave is a regional atmospheric feature, with some areas of the globe, such as Antarctica, well below average. The global average, however, is well above average as presented in the second figure.

This anomaly map provides us an opportunity to follow the evolution of the lower tropospheric temperature anomalies over the coming months. As shown at http://discover.itsc.uah.edu/amsutemps/ [e.g. click the 600mb Aqua data], we are at the time of year with the warmest global average lower tropospheric temperatures. We are, also, of course, at the time of the year in Russia with the warmest temperatures at these levels.

However, the absolute temperatures will soon start to fall both in Russia and globally (i.e. we will have global cooling for the next 6 months or so). If global warming (as diagnosed by an annual global average) was a more-or-less linear accumulation of heat, than the heat accumulated (as a positive temperature anomaly) in the lower troposphere must remain in the coming months.  The regional anomaly in Russia, of course, can be displaced to other locations. 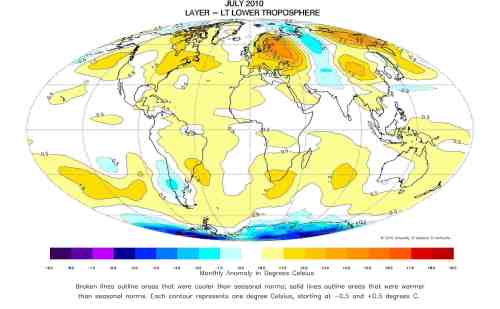